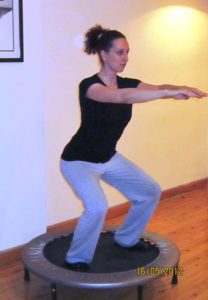 Let me start this article with a little story…

An ex professional wrestler, Albert Carter and his family were all proficient on the trampoline during the mid 1970s. One day his daughter announced she had been arm wrestling with the boys – and had won. Then his son began to follow his father’s steps and began to learn wrestle and Albert realised that he was stronger, fitter, quicker and better balanced than his opponents. At this time Albert was 36 years old but still doing over 100 one arm push ups at a time and had a resting pulse rate of 39 (the average is 60) None of his family did any training other than trampolining. He tried to research it but there was no mention of it in exercise books.

Then one night when he was traveling across the States by plane he realised that the one thing that all exercise has in common is that to a greater or lesser extent it involves defeating gravity. Any form of training needs some form of opposition since without opposition no strength is needed and no effort is needed so the training effect would be nil.

Trampolining harnesses 3 powerful forces – gravity, acceleration and deceleration. Your body will automatically strengthen itself to cope with the worst conditions it repeatedly encounters. If you put yourself under apparent 11/2 times normal gravity it will adapt to cope with this. Trampolining was harnessing and using the forces of gravity effectively. Working on the rebounder permits more intense jumping than a hard surface. This means that in every skip and bounce you will take your body to about 3.5 G which leads directly to more intensive training per  time unit and indirectly leads to an absolute increase in training effect. 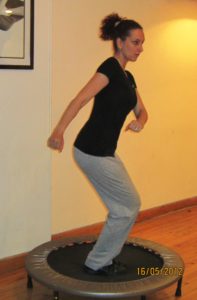 Albert next developed a trampoline which was lower off the ground and had less bounce than a traditional trampoline to avoid the dangers normally associated with trampolining. The rebounder had arrived.

I like using it for my training and that of my clients because because I feel my heart rate working at the same rate as it does when I run – running which by the way bores the hell out of me – I am not a natural runner – I do it because I know it is good for me! But there is no impact on the back or knees, as you get when you jog or perform high impact aerobics – something else I DO like to do but isn’t great for the joints. This means you can work at keeping your heart rate up for longer –meaning of course you can get fitter more quickly and burn more fat! Because of the resistance your leg muscles also get an amazing strength workout.

The American space agency NASA made a study of the training effect of trampolining below the level where you jump at a level of 4G (four times normal gravity) and found that at this level it is 68% more oxygen efficient than other forms of exercise. This means you can exercise quite strenuously without feeling out of breath but still gain the same benefit from the same level on a hard surface. This means it is great if you are prone to asthma!

4G is the level at which the highest training effects are achieved according to NASA. After this the degree of efficiency drops. This makes the rebounder the ideal training tool.

When NASA measured the stress on the ankles, knees, small of the back and forehead, there was twice as much stress on the ankles as the forehead when exercising on a hard surface. However on a trampoline the stress was almost the same.  As a result Rebounders are being used to treat sufferers of arthritis (of which I myself suffer) and a variety of injuries involving bad backs and knees and shin splints.  Rebounding gives you the same benefits of jogging performed over a longer time period but without the skeletal shock. For those with bad backs it dissipates the impact stress experienced when running or jumping on a hard surface.

The NASA research also showed that rebounding helped restore the bone mass that astronauts had lost while in space. Subsequent medical trials in the US have shown that it can stop osteoporosis getting any worse.

When running or jumping on a rebounder the surface gives way in all directions and this gives optimum stimulation to the body’s balancing mechanisms. It therefore helps to improve balance co ordination and utilizes the core muscles.

At the top of the bounce your body becomes completely weightless. This stimulates the lymphatic flow. Not many people know that there is 3 times as much lymph fluid as there is blood in the body. An uninterrupted and efficient lymph flow is probably just as important to your health and general wellbeing as sound circulation and a strong heart. The frequent gravity/no gravity repetition provides the pump to stimulate the lymph into moving more efficiently. The lymphatic circulation helps to clear toxins and waste matter from the body, including cholesterol and improves the effectiveness of the immune system.

There are also claims that by stimulating the lymphatic system it can gradually cure various allergies.

In addition to all the usual benefits associated with aerobic exercise, rebounding also relaxes the body and relieves stress and tension. Many headaches and stiff necks are the result of stiff muscles at the back of the neck and across the top of the shoulders. Exercising on the rebounder has been found to relieve this in many cases.

The rebounder is increasingly being used to combat a variety of other problems. Some with Parkinson’s disease claim that bouncing helps to keep the illness at bay and women who suffer from PMT said that rebounding improved their symptoms.

The growing problem of hyperactivity in children is now thought to be connected to a lack of physical activity. Children love bouncing on the rebounder and it is recommended for parents who find their children aggressive or difficult to cope with.

Rebound training has now become part of the training programs of athletes too. It has become an integral part of training for top performance sports and is used by runners, tennis players, skiers etc.

By now many of you must be thinking –where can I start? When? How?

It CAN be done at home in front of the TV or at home to your favourite music – and is much cheaper than a treadmill –but make sure you have a good quality rebounder with non slip feet, a reinforced frame to take the force of the springs and a heavy duty mat that has an even tension on 36 chrome springs to ensure a self centering safe bounce. It should not tip up no matter how heavy the person jumping. Reebok rebounders are available in Cairo and are ideal. Beware of items that look like rebounders but are really little trampolines. Trampolines are designed for tricks and acrobatics and can be dangerous without special training.

You also need a structured basic program – just like anything there is a right way and a wrong way. Jumping high with stiff legs for example is NOT recommended! Even knowing your basic posture on the rebounder is important for maximum effect. There are a great variety of fun moves that you can perform on the rebounder. It is not just a case of basic jumping

At Body By Design we use the rebounder during the cardiovascular intervals of interval, circuit training or boot camp workouts.

57 thoughts on “REBOUNDING- WHAT IT IS AND WHY IS IT GOOD FOR ME?”