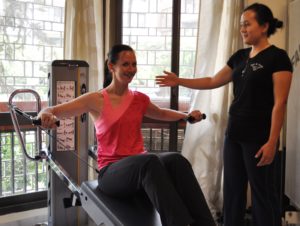 A few of you may be aware of this new piece of equipment gradually entering the gyms and fitness facilities around Europe and the US but I suspect many of you will not, despite the fact that at Body By Design we have had the Total Body Gym since 2010 and it is still one of only a few in Africa and the Middle East.

This is something to look out for in the next few years. It has been around for a while in it’s current form but previously was around for even longer marketed by another company for rehabilitation or home gym use which is where if you are old enough some of you may have seen it years ago! 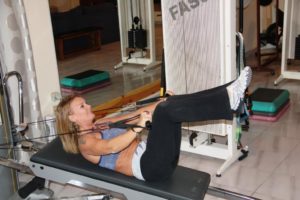 What first impressed me was the versatility of this machine. It is still a great tool for rehabilitation and is found in rehab centres all over the States. In fact when I recently had a total hip replacement myself this machine was all I could use for the first three months to work out with. Due to it being so user friendly, despite being on crutches, I could use it alone. I didn’t need someone to hand me dumb bells or help me up and down from the floor. Because it can basically fold away like an ironing board it is also great for home use with it’s repertoire of over 220 basic exercises (and more if you are creative) so it takes up little space and can replicate every exercise you can perform in the gym.

However because of it’s versatility the new improved Total Gym (supported by the Gravity Training System) is increasingly turning up at fitness clubs worldwide used for group exercise, Pilates classes and personal training sessions. 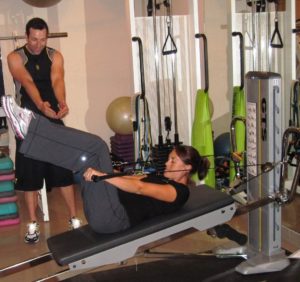 For those of you familiar with a Pilates Reformer machine it does look similar with the addition that the glideboard (a bench that has the ability to literally glide!) can be positioned at different angles up an incline resulting in all exercises (whether Pilates based or regular resistance training) becoming more or less challenging for the individual depending on where the glideboard is hooked into the supporting tower.

The resistance for all the exercises performed on the Total Gym comes from the body weight of the user and a fitness professional qualified and experienced with working on the machine can create exercises for isolated muscle groups or complex muscle groups. It has great scope for functional training, whether for everyday or sports specific. Users can work with it to achieve muscle strength or size, flexibility, balance, power or endurance. Using pulleys, the adjustable inclined glideboard , levers and attachments it can challenge anyone from those in rehabilitation and the total beginner to the athlete and body builder.

Working on three planes (for the fitness orientated readers these are the frontal, sagittal and transverse planes. For the rest of you it means it works at all angles of the body!) and at whatever range of motion is necessary for the required goal it means that any exercise can be executed. The line of pull can be varied depending where the pulley is moved to (eight positions) and the resistance determined by the angle of the glideboard and the individuals weight.

At Body By Design we have clients that fall into one or another of those categories listed above and many others besides. Five years ago I first attended a ‘Gravity’ workshop in the UK and saw the potential of this machine for every segment of the population and especially the wide range of clients that walk through our doors. After attending further similar workshops in the UK I finally imported the Total Gym for each of our personal training studio branches four years ago.
Trainers working with the machine whether for resistance training, fitness and endurance (yes you can do an entire cardiovascular session or aerobics class on one!) or Pilates need not only to have sound biomechanical knowledge but some additional training in order to make the most of what the machine can offer.

Trainers at Body By Design have been personally certified by Greg Sellar, UK Master Gravity Trainer, meaning we now have the first officially certified and trained instructors in Africa and the Middle for the Total Gym!

The photos give you an idea as to some of the ways the Total Gym be used. So if exercising with dumb bells is not your thing or your workout needs a change or variety, remember there is one available for your personal training program in both Maadi and Zamalek!

119 thoughts on “THE TOTAL GYM – THE GRAVITY TRAINING SYSTEM”